skip to main | skip to sidebar

After I participated in the AZ Super, I was watching some you tube video from the race.  My 18-year-old son was watching over my shoulder and we started talking about the races and course.  This evolved to discussing doing one together.  He got excited about it and I signed us up for the PNW Sprint right away! 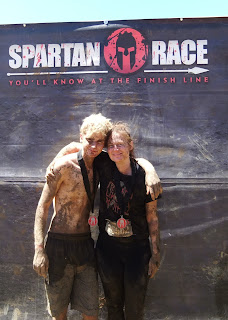 I have to share how PROUD this kid made me. It is not that he finished the race although he did amazing. It is HOW he did it. As 300 of us took off for the course from the 'gate', there was a gentleman next to us I had met briefly that morning. He was meant to do the Hurricane Heat, but twisted his ankle walking from the parking lot. He had taped up and was going to DO the race. When we hit the first steep hill, he had to walk and it got painful. My son, at 18, told his buddy (who he had talked smack with for weeks AND during the 7 hour car ride from Boise, ID to Washington) to go ahead, and he walked with this man. They talked and I know this man shared some great life insight, etc. with my boy. My son checked on him, encouraged him and NEVER got impatient or in a hurry. Not even as the next heat caught up to us.  He never, EVER, left him behind. When the man decided, he had to bow out, my son stayed with him until the medic quad got there, loaded him, and took him down. (this was about 1/2 way through) he then kicked it in high gear and finished only 5 minutes behind the buddy that he sent ahead at the beginning. As soon as he finished the race, he went to find Dave (the man he walked with), to check on him and make certain he was ok. Daniel was in such a hurry that he missed getting his finishers shirt.

Daniel mentioned to me several times that Dave had been headed back up to finish when he saw him afterward.  He also told me what a great person Dave is.  Not even once, has he said anything about wondering what his finish time would have or could have been.  There has been absolutely no mention of disappointment or the race being different from planned.

This Spartan Mom has never ever been prouder of her Spartan Son than she was during the PNW Sprint in Washougal, WA.

Trujillo David E OK so let me set the record straight here there would have been NO WAY i could have done this without your son. I made it a little more than half way with his help then i told him i needed a medic and he should go he didn't leave till i got a medic to help me out. I got to the tent the medics were awesome cut off my shoelaces my sock and my nasty Ace bandage, little ice, little Motrin, and a lot of wrapping and one taped on shoe later a lift back up to where i ended up. Your son was just finishing his heat up and i saw him on my way back up the hill he told me i was nuts:) i must admit though i didn't climb that hill again but did do burpees. Thanks for the medic who drove me back up there so i could complete the race. wish i had my tracking tag that they cut off my foot in the medic tent. BUT I DID FINISH they even have a pic of me limping over the fire it was on the wall at the after party. PS after the Doc visit today and X-Rays i have a cracked Talus bone small ankle fracture wish i could scan the xray but my pic will have to do as proof hahahahaha ill post it shortly hard getting around at the moment :) AROOO my Spartan Brother who helped me through you wont be forgotten and your story will be told my friend. Next year we run it together start to finish

A few more pics of my amazing son from the race. 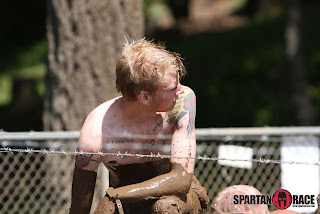 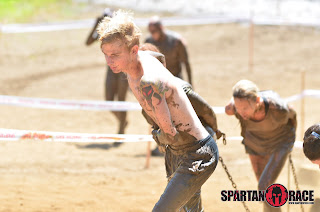 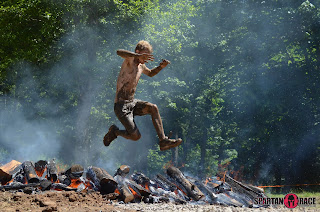